Week Sixteen of the 2022 Session: A few of the Governor’s Priorities were approved this week. The Governor signed some bills. No movement on the Budget or School Choice. This UEN Weekly Report from the 2022 Legislative Session covers the following:

Big Policies to the Governor: there were several policy areas of contention between the House, Senate and Governor a few weeks ago. The following priorities were considered, compromises reached, and sent to the Governor:

The bill was sent to the Governor, with the UEN registered as undecided. Although it is too late to change this bill, a provision could be included in either the Education Appropriations or Standings Appropriations bill to either remove this requirement from the BOEE or appropriate state funding to make up the shortfall.

Governor Signs Some Bills: on Friday, April 22, the Governor signed 26 bills into law. Among them, these three bills are of interest to education: These three impact Education:

Status of Appropriations: the following table, also from the IALNS Bulletin, April 27, 2002, shows the progress of appropriations bills, all of which have been approved by the House with no action in the Senate but for the Transportation, Infrastructure and Capitals bill. The only remaining budget bill not discussed in the House is the Standings Appropriations bill, which includes state foundation aid, typically introduced as the last budget bill of the Session. 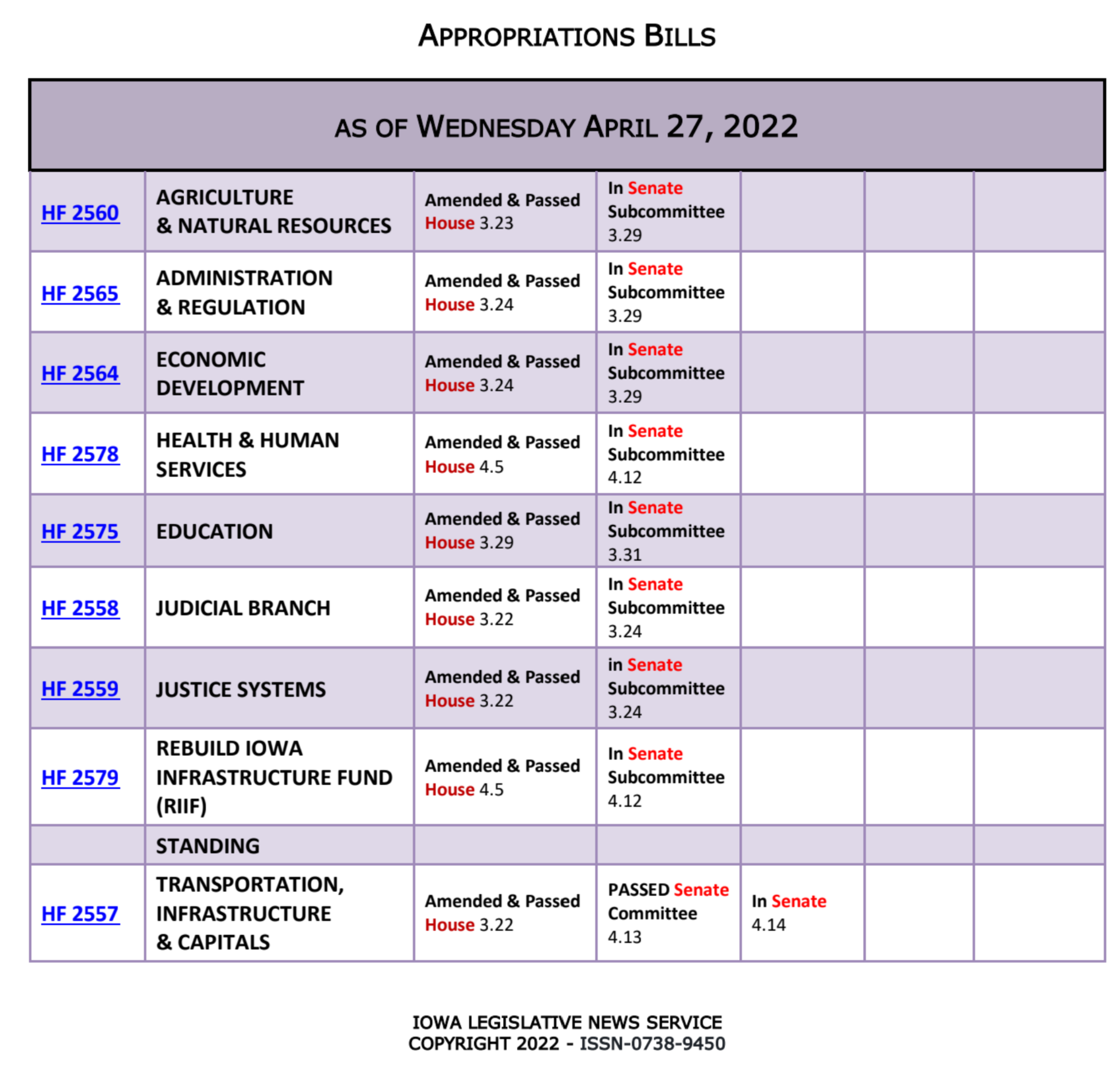 See the March 31 UEN Weekly Report for details of the Education Appropriations Bill HF 2575. One specific detail worthy of mention: Division X of HF 2575, amended onto the bill in the House, would have prohibited school boards from giving an outgoing superintendent severance pay exceeding three months of salary. Sen. Cournoyer, chair of the Senate Education Appropriations Committee, has told us that she intends to remove that provision from the bill in the Senate.

SF 2369 Governor’s School Choice/Voucher Omnibus: this bill is still in the House Appropriations Committee without a subcommittee assigned. See the March 31 report for all of the details, including the Parents’ Rights Provisions and Policies to Address Teacher Shortages amended onto the bill. The April 28 IALNS Newsletter states, “The House has not brought the scholarships to the floor due to a lack of support. Many House Republicans have not made a public statement on support or opposition to SF 2369, but as many as twenty House Republicans may oppose the bill.” We still believe this to be the case, but leadership negotiations are behind the scenes and ongoing.

If you are at legislative forums or connecting with your Representatives and Senators, the talking points in the March 31 UEN School Choice Call to Action are still relevant. However, at several meetings the Governor held last week in rural areas with school leaders, she mentioned the Education Savings Plan policies in Florida and Mississippi as good models. We did a little policy digging and have the following to share with you. No need to seek out your legislators with this additional information, but if it comes up in conversation, feel free to talk about it.

One initial disclaimer; Iowa already has considerable school choice options. There is no reason to believe that one more increment of competition would have any additional impact on quality. However, before agreeing with the statistics on test scores or anything else that suggests these are model policies, consider the following:

Advocacy Actions This Week, no Change from Last Week:

Connecting with Legislators at the Statehouse: To call and leave a message for a Senator, call the Senate switchboard operator number is 515.281.3371. To call and leave a message for a representative, the House switchboard operator number is 515.281-3221. You can ask if they are available or leave a message for them to call you back. You can also ask them what’s the best way to contact them during Session. They may tell you email, text message or phone call is the best way to connect with them during the Session, based on their personal preferences.

UEN Advocacy Resources: Check out the UEN Website at www.uen-ia.org to find Advocacy Resources such as Issue Briefs, UEN Weekly Legislative Reports and Weekly Capitol Video Updates, UEN Calls to Action when immediate advocacy action is required, testimony presented to the State Board of Education, the DE or any legislative committee or public hearing, and links to fiscal information that may inform your work. The latest legislative actions from the Statehouse will be posted at: www.uen-ia.org/blogs-list. See the 2022 UEN Advocacy Handbook, which is also available from the subscriber section of the UEN website.

Contact us with any questions, feedback or suggestions to better prepare your advocacy work: